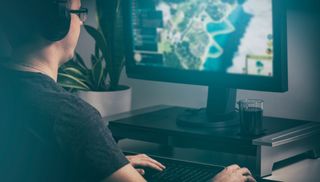 Throw around all the numbers you want about the popularity of Fortnite, or how League of Legends fills out arenas all over the world, but a well-crafted solo experience has the unparalleled ability to sweep you away to meticulously crafted worlds and immerse you in unique forms of storytelling.

Make sure you check out our picks of the best PC games as well, for the very best single and multiplayer PC games from a wide range of genres.

Four years on from release, millions of gamers continue their solemn journeys across the war-ravaged low-fantasy world of The Witcher 3. It remains a high watermark of videogame storytelling; everything from side-quests with lowly peasants to the political tinkerings of lords and barons seems to get the same degree of love and attention from the writers.

It’s the game that made surly, concrete-voiced hero Geralt of Rivia a gaming icon (and soon to be star of a Witcher Netflix show). The world is not just sensational in terms of topographical scale and variety, but also in its sense of history and life, as it seems that every village, castle ruin and cave has a story to tell.

The fact that The Witcher 3 remains as impressive an experience today as it was when it first came out is testament to its pioneering role in the medium.

There’s something audaciously old-school about a game that does away with meaningful plot in favor of vicious, driving violence. In 2016’s Doom you’re somewhere between a human battering ram and artillery cannon, tearing apart and decimating a familiar but vibrantly redesigned army of demons in the most satisfying ways imaginable.

A key conceit is that in order to gain health and ammo, you need to charge headlong into the enemy and pull off brutal Glory Kills, forcing you to always be right up in the faces of shrieking Revenants and obese Cacodemon heads.

Everything in the game – from that forward momentum to the clanging tech-metal soundtrack – propels you, leaving you breathless after each fracas like no other game…

… except maybe for the upcoming sequel.

A remake of one of the great survival horror games can be a poison chalice, but Capcom managed to create a magnum opus both within the series and among all videogame remakes.

Like the original, RE2 REMake has two overlapping campaigns as Leon Kennedy and Claire Redfield. While it follows the narrative beats of the original game, it’s also an exemplar of modern level design, as you solve puzzles and open up shortcuts around the mazey Raccoon City Police Department.

Each zombie is a bullet sponge and mortal threat, resources are limited, and an infallible blue man dressed like a hard-boiled detective marches after you through much of the game. Remake or not, this is one of the best horror game ever made.

The makers of Towerfall, one of the greatest couch multiplayer games around, took some of that game’s best mechanics and converted them into a triumphant 2D platformer about climbing a mountain.

The core mechanic is the ability to dash in eight directions, but as you progress you’ll find yourself encountering an ever-growing trickle of new obstacles and challenges. Eventually, Celeste amounts to a tough old time.

Many levels can be played through in different iterations, and all that finger-cramping platforming is enveloped by a touching story about friendship and tribulation. Celeste feels as important and seismic for the modern 2D platformer as Super Meat Boy was when it came out nearly a decade ago.

Taking a year out in 2016 to rethink the Assassin’s Creed series was a wise move by Ubisoft, and with Odyssey that decision really paid off. Looking to RPGs for inspiration, it’s an unthinkably large open-world adventure set in the arid azure idyll of the Hellenic peninsula.

It’s not just the scenery and gloriously recreated Greek architecture that makes Odyssey such a joy, it’s in the way Alexios and Kassandra’s story weaves through history and myth, and in how it refines certain systems – like ship-sailing and level-based enemies – from previous games.

Some will balk that it’s no longer the cloak-and-dagger assassin game the series is known for, but the reality is that it’s now become so much more.

When the Total War series stagnated with Rome 2, for its next project Creative Assembly took on one of the most inspired possible fusions of videogame genre and IP: epic-scale strategy and Warhammer.

Total War: Warhammer 2 embraces the asymmetry of its source material, with each faction offering a unique tactical and narrative experience. If you also own Total War: Warhammer 1, all the major factions of the vibrant grimdark world are represented in the sequel.

Skaven lurk in city ruins and skurry through an underworld, Vampire Coast pirates embark on treasure hunts, and Dwarves hunker down behind heavy armour, ready to repel any infantry charge.

Each campaign lasts dozens of hours, offering endless clashes between the most well-crafted, inventive armies seen in a strategy game.

Sekiro is a tense, tough, and visually striking samurai game set in a mythologised feudal Japan, and it’s one of the best single player PC games you can buy.

If you’ve played Dark Souls or Bloodborne, you’ll know what to expect, and know already whether its unforgiving style is for you. Some see the punishing combat as sadistic, others see it as a high-challenge, high-reward experience with no equal. Whichever way you lean, you can’t question the precision of Sekiro’s mechanics.

Where Sekiro differs from its spiritual predecessors is that it’s less obtuse, with a linear, coherent narrative and an inclusion of more mainstream action-game elements.

You leap around vertically-oriented levels in search of shortcuts and secrets, while combat is about finding the right angle and timing for that precious killing katana blow. It’s never easy to land, but once you start doing so regularly, you begin to understand what all that suffering is for.

8. What Remains of Edith Finch

A complete change of pace from the big-money behemoths that populate this best single player PC games list, Edith Finch is so poignant and beautifully crafted that it will touch the souls of even the most stubborn walking-simulator naysayers.

As the titular character, you wander around her vast, recently abandoned family home set on a haunting, crepuscular island in Washington State. You explore the richly detailed house, entering the still-furnished rooms of each family member where you get swept up in dreamy, surreal vignettes showing how they died.

It’s a meditative game about piecing together the story of a family that seems to be afflicted by an implacable curse.

Edith Finch is the kind of thematically heavy, highly curated experience that doesn’t seem to be quite done justice by the word ‘videogame’.

Of all the genres to have re-emerged since the indie revolution nine-odd years ago, the Metroidvania has been the biggest benefactor. The kinds of games that have come out haven’t just been throwbacks to the good old days of the 90s, but profound evolutions in their own right.

Hollow Knight feels like the zenith of the last several years of Metroidvania design, and it’s earned its place in this list of the best single player PC games. You explore an enchantingly forlorn subterranean kingdom as the titular knight, incrementally gaining abilities that let you descend deeper into the world.

It’s both brooding and cute, magical and challenging, shaped by thoughtful touches like the fact that Hollow Knight physically pulls out a map whenever you look at the map screen.

One of the tragedies of single-player gaming is that the immersive sim – descended from cerebral first-person games like System Shock, Thief and Deus Ex – has rarely been a big seller. So the future of masterpieces like Arkane’s Dishonored always seems tenuous.

Dishonored 2 casts you as a preternaturally gifted assassin on a revenge mission in the sun-kissed steampunk city of Karnaca. Each sizeable area lets you explore apartments, shops and cluttered rooms from all angles before swooping in on your objectives.

It’s both visceral in its black-magic-and-blades combat, and ingenious in its level design, with the ever-shifting Clockwork Mansion and the time-travelling Crack in the Slab offering some of the most memorable gameplay sequences you’re likely to play.