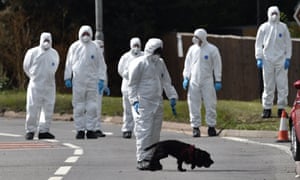 Detectives were granted an extra 36 hours on Saturday to question 10 suspects arrested on suspicion of murdering a newlywed policeman who died after being “dragged for a distance” by a van after responding to reports of a rural burglary.

Forensic teams meanwhile continued inspecting a countryside caravan parkin Berkshire where the suspects had been staying, three miles from where PC Andrew Harper died from multiple injuries on Thursday night after being hit by a vehicle. He was due to go on honeymoon next week.

At a press conference, Det Supt Ailsa Kent of Thames Valley Police’s major crime unit said all those arrested, including a 13-year-old boy, were from the Four House Corner site, “a local authority-run caravan and mobile home site”. They were arrested within an hour of the incident. As tributes poured in from across the country, and Harper’s father, Philip, said the family were devastated, fresh details emerged of the murder investigation.

However, she said the force still did not know why or how Harper came to leave his patrol vehicle near a crossroads on the A4 near Sulhamstead village, Berkshire.

“The circumstances as to how Andrew came to be out of his vehicle and then caught under the suspect vehicle are unknown,” she said.

Earlier in the day, statements from Thames Valley Police revealed that Harper, who became a regular officer in 2011, was responding to reports of a burglary at a residential property at 11.18pm when he was struck.

An officer on duty with Harper was not physically injured but was receiving emotional support, the force also confirmed.

An unnamed witness reportedly described a fellow officer standing over Harper as he lay on the road and shouting: “Stay with me, stay with me, keep breathing.”

Throughout the day grieving colleagues laid floral tributes at the scene of Harper’s death, with one describing him as “Thames Valley’s finest”.

His father told Sky News: “We’re in a bad place” as events surrounding his son’s death continued to surface.

The chief constable of Thames Valley, John Campbell, said: “Everybody I’ve spoken to about Andrew talked about the incredible personality he was, what a fantastic police officer, and what a great friend and man he was, and he’ll be sorely missed by everybody.”

Photographs released on Saturday showed Harper, who married his fiancée Lissie four weeks ago, at their wedding last month at a Georgian manor in Oxfordshire. One showed him cutting the cake with new wife next to a sign reading “Happily Ever Harper”. During the ceremony he gave her a card that read “Life is slippery. Here, take my hand”.

By early evening on Saturday a fundraising page set up by Harper to support children with cancer had been flooded with donations and had already raised an amount 15 times greater than his target of £500.

The death also reopened the debate on police safety, resources and levels of violence in the UK. It comes shortly after PC Stuart Outten was stabbed in the head in Leyton, east London, on 8 August. Days later a West Midlands police officer was injured when he was run over with his own vehicle.

On Saturday police federation chair John Apter denounced the “shocking” rise in violence against officers. He blamed fewer police officers on the streets, as well as a “more violent” society where “people think they can stick a knife in someone for a pair of trainers”.

Ken Marsh, chairman of the Metropolitan Police Federation, told the Observer that the loss of 20,000 police officers had left other officers vulnerable, particularly in rural areas.

“Outside of London you can have a single officer out with a geographical area of 40 square miles on their own,” said Marsh. He added police representatives had repeatedly raised concerns with the Home Office over officer safety. According to the parliamentary library, Harper was the 20th officer to have been killed in the line of duty since the year 2000; eight died after being struck or dragged by a vehicle.