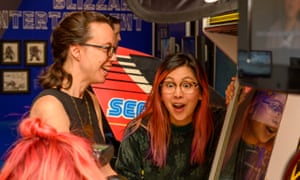 One of the stranger side-effects of breakneck speed technological advancement is its ability to rapidly generate nostalgia: the greater the speed of change, the greater the volume of outdated technology in its wake. This phenomenon is most apparent in the world of video games. A 20-year-old video game feels far more dated than a 20-year-old novel, and games from the 70s and earlier are quite literally museum pieces.

Nostalgia is thus a key theme at the opening of Game Masters, the video game exhibition that launched at ACMI in 2012 and has now, after seven years touring the world, found its way to Canberra. Eighty games, all playable, are arranged in a chronological history that starts with original Space Invaders and Pac-Man arcade cabinets and finishes with a selection from the vast choice of games available to players in 2019.

For anyone with fond memories of growing up with games, the show is a sort of fantasy arcade in which your inner teenager can get lost for hours (your correspondent was gently ushered out the door of the press preview after disappearing into 2005 Playstation 2 masterpiece, Shadow of the Colossus). But seeing this show as just a nostalgic day out for gamers would sell it short; it’s also a way to trace the evolution of a form that’s only now starting to be taken seriously.

Although it’s set out chronologically, the exhibition is further divided by its auteur-style focus on “creators”. As National Film and TV Archive CEO Jan Müller explained to the assembled media upon opening, one of the curatorial aims was to focus on “innovators in the gaming space”. After all, he says, we’re all familiar with the names of authors, film directors, even TV showrunners, so why not the people who create games?

But as the years pass and the number of people working on games increases, “creator” is a term that becomes more and more difficult to define. While it’s easy enough to point to, say, Alexey Pajitnov as the creator of Tetris (a curious omission from this show, by the way), it’s significantly harder to pin down a single identity behind many of today’s titles.

Where the idea works, it works well. It’s fascinating, for instance, to trace the work of British designer Peter Molyneux from Populous – a game that both entertained and frustrated me as a teenager, and whose foibles Molyneux later attributed to “my incompetence as a games programmer” – through Dungeon Keeper to the far more polished Black + White.

At other times, though, the idea feels a little contrived. Some “creators” get only one game, in which case the focus is more on the game itself than on its designer. In other cases the concept is extended awkwardly to include an entire studio (Blizzard, for instance, whose Warcraft and Starcraft franchises both feature). But if Blizzard is here, why not, say, id Software, whose Doom and Wolfenstein franchises basically created the entire first-person shooter genre?

Still, these are ultimately minor complaints – with finite space, there will always be omissions, and the diversity of games on display remains impressive: there are arcade games, console games, PC games, mobile games – you name it. Many of the games that do feature are examined in great detail. 2000’s Deus Ex, for example, is accompanied by original design documentation. Meanwhile the display for 2008 species development simulator Spore features 3D printed character models to go with its concept art. The amount of detail and ancillary material on display is a highlight of the exhibition.

Happily, Game Masters also includes a healthy selection of indie games, although it’s a shame that the exhibition reinforces the divide between these games and their more commercial counterparts by shunting the indie section off into a side room. It’s here that you’ll find the work of local studios – representation that feels particularly important in light of the announcement that, as part of its mission to collect and preserve Australia’s audiovisual heritage, the National Film and TV Archive will now add games to its film and TV collection.

The initial intake comprises eight games; two of these – 2015’s Submerged and Mountains Studio’s Florence – are on display as part of Game Masters. Florence’s producer Kamina Vincent spoke eloquently at the show’s opening of what inclusion here means to her studio, explaining that she saw the original exhibition while still a student – and now, seven years later, her game is here, immortalised as part of the history of gaming. “It’s a huge honour,” she said. “And my mum’s really proud of me!”

That original exhibition featured ever fewer Australian games, and it’s notable that Australia has been largely absent from the history of gaming. Even of the games selected for NFSA archives, only one (The Hobbit, released in 1982) dates from before the 1990s. Angharad “Rad” Yeo, the host of ABC TV’s gaming show Good Game Spawn Point, who’s also here for the opening, tells Guardian Australia that this is changing.

“The amount of talent here is really quite astounding, and we’re starting to see that when developers are given time, funding and support, they are making world-class games,” she says. “With a little bit more support, we’re going to see the [Australian] games industry flourish.

• Game Masters is showing at the National Film and Sound Archive, Canberra, until 9 March 2020