Home > All tech > Trevor Noah’s advice to tech leaders: ‘They are now the man that they were trying to disrupt’ 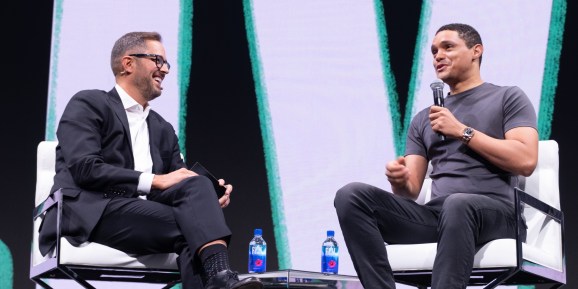 Trevor Noah is a comedian, writer, and political commentator arguably best known for hosting The Daily Show. Noah spoke today about technology, education, gaming, VR, and his foundation that helps children in the U.S. and South Africa. And of course, there were plenty of jokes.

But it was Noah’s advice to tech leaders that arguably stood out the most onstage at Pluralsight Live in Salt Lake City, Utah. Tech companies today are seeing an unprecedented backlash from governments, advocacy groups, and consumers. For that exact reason it makes sense to look beyond the tech industry for an outside opinion.

Noah lamented about how we can securely do so much on our phones, whether it’s with blockchain or two-factor authentication, and yet we can’t vote without physically going to the ballot box. Meanwhile, elections are being influenced and decided by what people consume on social media.

Pluralsight CEO Aaron Skonnard asked onstage, “What advice would you have for all the tech leaders here about our responsibility?” Trevor Noah responded:

I think one of the biggest things, tech leaders really, really, really need to reckon with is a responsible, rolling out, or a responsible acknowledgement of the power of technology. We’re seeing that today in Silicon Valley. Silicon Valley was this, I think, a very idealistic place. It started out as this world of like, a few guys in hoodies trying to change the world. And that was a great idea to begin with. But what really has frustrated me is now a lot of those people refuse to accept that they are now the world. They are now the man that they were trying to disrupt. They are now the behemoths that they were looking to shake up.

And so, I look at all of them, the Jack Dorseys, the Mark Zuckerbegs, etc. They seem to try to maintain this image. No.

You are what GE used to be. You are a giant, massive corporation that’s just in a different space. And so just as those other corporations had to reckon with the effects of what they do, tech leaders have to be careful and responsible with the technology that they create. It doesn’t mean people shouldn’t create. But what people should try to do is think of all the ramifications of what they create can do.

You have to think of how people will keep up with your technology. You know, the same way that the tobacco industry was forced to reckon with its addictive properties is the same way social media companies have to be talked to. They have to figure out how to deal with their addictive properties. Yes, we don’t have the tools right now to measure how much it affects our brains or minds negatively, but there will come a time.

The same way with cigarettes, when we look back, and we’re like ‘What? People used to smoke on planes, pregnant women were allowed to smoke. This was a normal thing?’ We’re going to look back on this age now and say, ‘Wait, we just let kids go on social media. This was thing? Your child could be on Facebook? Your child could be on Instagram?’ It’s going to be wild when we look because we did not look at the ramifications of what we created. And I think that’s part of what tech is supposed to be doing.

Trevor Noah also talked a little about how his career took off in South Africa. What began with burning CDs turned into his friend pitching him as the first DJ that “uses a computer.” That turned into a full-fledged business.

Noah went from DJ to people wanting the DJ and the equipment. So he would also bring speakers, amplifiers, and music. Then he realized he could contract that out. Soon a troupe of dancers were needed because there was new music “people didn’t know how to dance to.” That meant transportation was required. Successful parties led to more gigs. And suddenly multiple people were benefiting from a business that started off with pirating music.

At a young age, Trevor Noah was able to leverage a skill that no one else around him was able to acquire. And he managed to monetize it through all its iterations.

“I feel like that’s all tech in business is,” said Noah. “Finding a really simple idea or a simple need that people have and then take you into it. What tech has done is given a lot of us opportunity to reach out to individuals and provide a very niche fulfillment of needs on a wide scale stage. Before it was very much like you had to give everyone everything. Whereas now you can say no, I just provide this to all of these people. And everyone can just get that one thing from you. And I think that’s what I learned very early on with regards to tech is how it gives you the ability to find your consumer and your consumer the ability to find you.”

On his mother pushing him into tech

Noah credits his mother for getting him into tech. “My mother always lived in a world where she possesses a mind that strives to break boundaries in terms of what she can do, what she shouldn’t do, and what people tell her are the limits of what she can do. And that’s how we got into computers,” he explained. “My mother took a typing course in South Africa at a time when black people couldn’t be hired in front office positions. But she was like, ‘I want to learn how to type.’ And when I ask her now in hindsight, “Why did you do that? It made no sense.’ She says, ‘Yes, I know it made no sense to learn how to type because I would never have gotten a job as a secretary. But in my head, I thought to myself, I would rather have the skill if the time comes, than to not have the skill, when the opportunity shows itself.”

Noah now reflects on this as thought-provoking. “That’s a really crazy, interesting way to think,” he said. “Why would you do anything, unless you see the opportunity in front of you. But I guess in many ways that is the only way you should think, is to be prepared for every single opportunity. And that’s why we study fundamentally, that’s why we try to create, and that’s why you try to innovate. It’s the hope that the opportunity presents itself. That’s why you create a software. ‘I will create the software first and I hope that then there will an opportunity to grow and create something.’”

His mother brought a home computer one day from a store that was closing down. She had no idea what it was but she brought it home because people were saying it was the future. Trevor’s family would use it, just typing away even when there was no software available for it. “Just even that idea is what propelled us forward as a family.”

On education and computer literacy

Noah also got into building computers and selling gaming rigs. Eventually he wanted to learn programming. But there was a cost involved. His mother offered to pay half.

“And I started working, to get the money to learn how to pay for that,” Noah explained. “And I haven’t stopped working ever since. And so unfortunately, I never got the opportunity to learn how to program. And that’s why I try to afford that opportunity to other kids now, because I realized that little hurdle. That cost that stops people can be the one thing that changes their lives forever.”

“Being born in America is a lot better than being born in Syria, right now. You can’t deny that. Yes a Syrian person can get here and can do well, but where you begin largely defines how far you can get. So what I’m trying to do with the Trevor Noah Foundation, is create an environment where kids just have that leg up to be at a place where other kids are in the world. Be in a place where computers aren’t a crazy idea. Just being in a place where it’s normal. [Otherwise] it’s completely a death sentence for your family. It’s going to define your earnings for generation.”

On gaming and VR

I think video games have done a fantastic job of constantly evolving, constantly learning, constantly engaging with the people they’re trying to engage. If you’ve play video games, as many of us have — it doesn’t matter if you’ve played on a mobile phone or if you’re an avid gamer that has a rig or a console — you know that one thing games do really well is they evolve with you. They evolve with the technology. And, the learning curve is really fantastic. A game will hold your hand at the level that you are at. Nine out of 10 games can bring you in having never played that game before. And it will teach you how to play the game, how to become proficient in the game, and then with difficulty settings, it can get you to a place where you are now excellent at the game. And that’s one thing I will always love about gaming.”

Noah said he’s fascinated with what is happening behind the scenes, and how powerful gaming can be as a tool. He touched on how he has been able to play golf on every golf course in the world, thanks to video games. Think about all the barriers to entry for a sport like golf.

“I think gaming is only scratching the surface of informing and teaching us as human beings, I think the possibilities are endless. If we can combine the addictive nature of gaming with the stickiness of gaming, and with the right tools, education, and learning. I think we can, as human beings, know so much more. The possibilities are infinite. If we can just harness those tools.”

As for VR, Noah believes we’ll get to a point where the technology becomes ubiquitous once it becomes completely accessible in terms of cost. He mentioned that Oculus and HTC have done “a great job” at showing what’s possible. And other companies like Google and Samsung have come up with low-end devices (although that was largely a failure). But the headset is still the main barrier.

“Once we can get to a world where you can truly just pop a little thing on to your face, sunglasses probably in the next 5-10 years, you can do and see everything,” Noah said. “A lot of the time that’s the only thing that separates people from one thing or another. Imagine a world where you can go to any university, you can go and spend every evening in Paris learning French in VR. You can go hang out with your friends in Spain. I think the possibilities are truly exciting, because I don’t even think we know how far it’s going to get.”